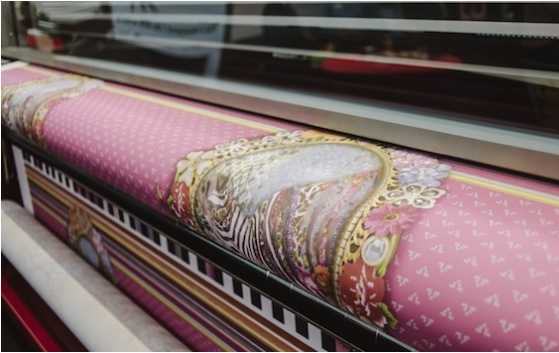 The double-sided 3.2m wide textile printer includes an integrated fixation that the firm said will open up new routes to market in textiles printing.

With the ColorBooster DS, Hollanders was showing at FESPA Digital 2016, from 8-11 March at Rai Amsterdam, what the company said is ‘the most unique printer available in the marketplace at this moment’. A one step double sided printer capable to print with a precision of 0.07 mm on 3.20m width on both sides.

“A 100% double-sided print is not common at all nowadays and we have succeeded in developing it: the ColorBooster DS; now ready for its bigger market introduction at FESPA Digital being a real highlight without an equal,” Hollanders CEO Jacco Aartsen Tuijn introduces.

“Tested at four very different customers sites, on a range of polyester materials, we are not only opening the market for double-sided signage but also for double-sided home decoration and fashion” Peter Hollanders CTO explains.

“With dedicated ink amounts and profiling we succeed in having exact the same colour on front and back. In mirror print, or on thicker materials in a two times positive print or a total different print on front and back.”

According to Hollanders, high quality coloured wovens can be printed/fixed in one step as with double-sided soft signage. It said these high quality, double-sided coloured fabrics are now achievable at much lower production costs and will be therefore made available for a much wider consumer group, extending creative possibilities.

Considering eco-awareness is an upward trend in the industry, direct printing with water based inks is Hollanders’ focus. The company also said that due to the printhead shower, which requires less purging, resources will minimized, and that energy savings are realised via built-in climate control.

For businesses wanting to employ greener working practices and a greater eco awareness, all of the machines from Hollanders are designed and manufactured with environmental principles in mind.

In this respect, the single sided ColorBooster 320, also first shown at FESPA 2015, will set new standard in robust printing. Having all the environmental advantages of the ColorBooster DS, it is designed to offer users flexible modularity that can be upgraded in the field as and when needed.

New at FESPA Digital this year was the possibility to upgrade to a stacked head configuration and a speed of 120 sqm/h.

Supplied with customer changeable Ricoh Gen5 heads, the CB 320 will be delivered with water based direct (high energy) disperse dyes typically very suitable for direct printing because of the high light fastness and production stability during fixation without bleeding or a halo.

With a maximum roll weight of 250 kg, Hollanders said the CB 320 is particularly suitable for the mentioned overnight printing.

Other typical features of the ColorBooster 320 are:

The Hollanders ColorBooster DS made its European debut alongside the latest company’s developments at FESPA Digital, from 8-11 March 2016 at RAI Amsterdam, 8-11th March 2016.

To find out more about the key benefits of the new machine and when it will be available, FESPA TV spoke to Peter Hollanders, owner of the company, on the Hollanders booth at FESPA Digital.