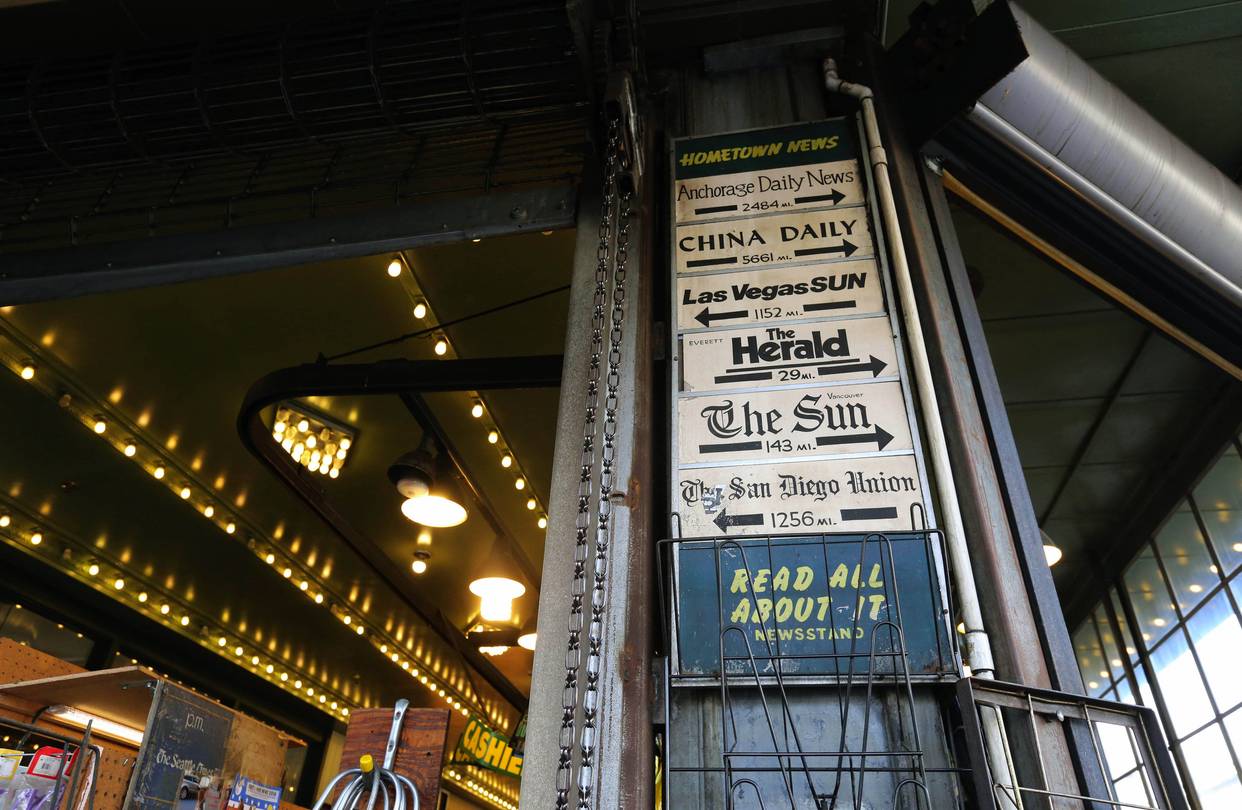 Newspapers are suffering an accelerating drop in print advertising, a market that already was under stress, forcing some publishers to consider significant cost cuts and dramatic changes to their print and digital products.

Global spending on newspaper print ads is expected to decline 8.7% to $52.6 billion in 2016, according to estimates from GroupM, the ad-buying firm owned by WPP PLC. That would be the biggest drop since the recession, when world-wide spending plummeted 13.7% in 2009.

That decline is hitting every major publisher, increasing pressure on them to boost digital-revenue streams even faster to make up for lost revenue and, in some cases, even reconsider the format of their print products and the types of content they publish.

Many newspapers have trimmed costs to cope with the worse-than-expected revenue decline. The New York Times Co. and Wall Street Journal-owner News Corp, likely have further head-count reductions on the way, and the Guardian and the U.K.’s Daily Mail recently eliminated jobs. Analysts such as Jefferies & Co. have pared back their third-quarter estimates for publishers including the Times and Gannett Co.

“We operate in a time of rapidly changing market conditions, especially in the world of print advertising,” Gerard Baker, editor in chief of The Wall Street Journal, wrote Wednesday in a memo to employees. “These are days of accelerating change in the newspaper business.”

In light of the steep downturn, the Journal this week announced a coming revamp of its print editions that will include the consolidation of sections and other cost reductions, moves designed to make the print newspaper more sustainable for the long haul and help accelerate the newsroom’s digital transformation. Meanwhile, the Times has been working on a strategy to significantly boost digital revenue by 2020, including shifting more resources into digital initiatives and looking at ways to revamp things such as its Metro section. 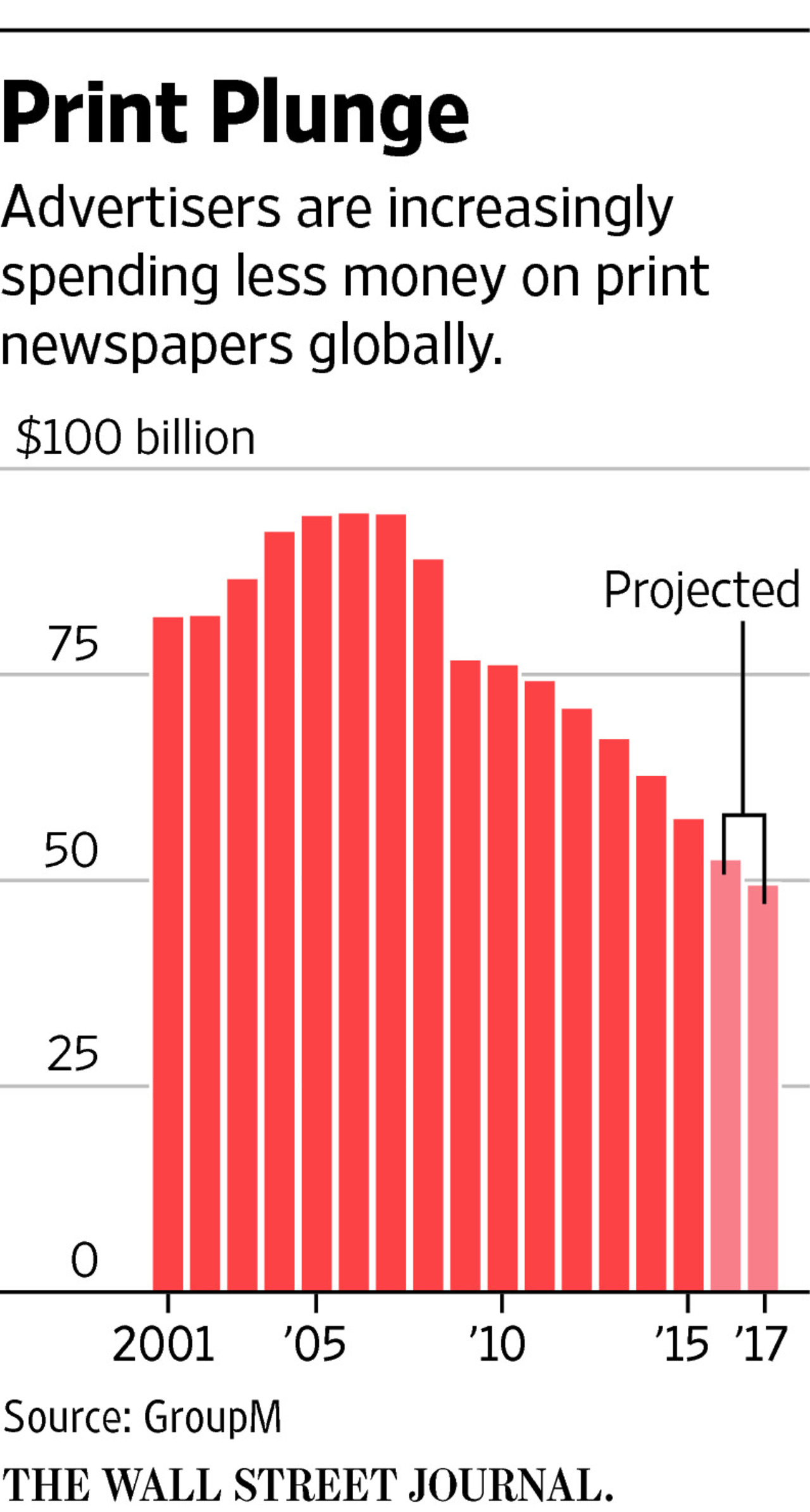 “It’s definitely been a hard year for print in the first half,” said Meredith Kopit Levien, chief revenue officer at the New York Times.

Newspapers have been in a race against time to grow their digital revenues to make up for the collapse of print advertising. They have made strides, but face challenges on that front, including the dominance of Facebook and Google in the digital market and difficulty making money on mobile products.

During the past decade, marketers have fled newspapers for a variety of reasons, including declining circulation, aging readership and the need to fund their digital initiatives.

Other factors more recently have come into play, including the growing use of data and analytics in the media-planning process. Moreover, advertisers aggressively are pushing into online video, and marketers in sectors such as retail, financial services and telecommunications are reducing print spending. 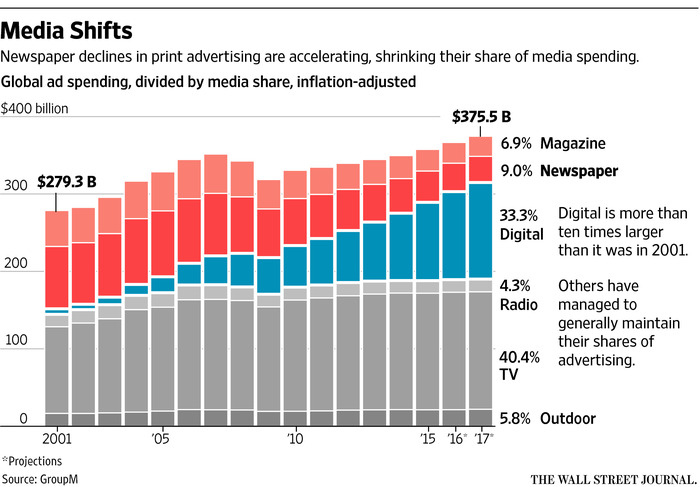 “There’s been acceleration in the downturn this year” in print advertising, said John Ridding, chief executive officer of the Financial Times. “That is partly structural towards digital and mobile and the major platforms, such as Facebook and Google.”

The newspaper print-ad outlook is a worrisome prediction given that the overall global ad market is expected to grow 4% this year to $529.1 billion, with a 14% acceleration in digital-ad spending, according to GroupM. Newspapers, however, aren’t alone in seeing ad dollars dry up. Global magazine ad spending is expected to decline 2.9% this year, estimates GroupM.

Although prices vary widely, the average CPM, which is the cost for reaching a thousand people, for a full-page ad in a national newspaper is roughly $100. Meanwhile, the average CPM for a broadcast TV ad in prime time that reaches 25- to 54-year-olds is roughly $37, according to several ad buyers.

That means that when an advertiser weighs the performance of print ads against their cost, print doesn’t appear as efficient as other media when ranking return on investment, said David Murphy, chief executive officer of Novus Media, an ad-buying firm owned by ad giant Omnicom Group Inc. 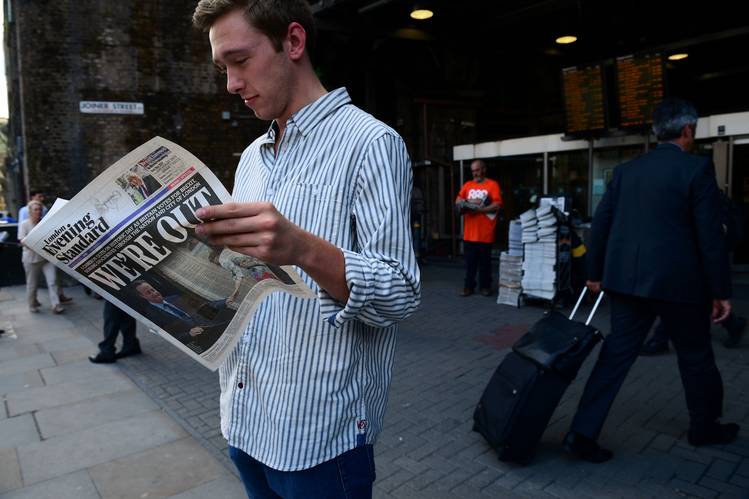 ENLARGE
Newspapers have been racing to grow digital revenues to make up for the collapse of print advertising. PHOTO:LEON NEAL/AFP/GETTY IMAGES

Using data and analytics in the media-planning process “is being leveraged by more and more national advertisers and retailers, and that is a recent phenomenon,” Mr. Murphy said.

Jefferies analyst John Janedis has forecast an even more difficult calendar third quarter. Last month he lowered his estimates for the New York Times, predicting a 17% drop in print-ad sales, worse than his earlier projection of 14%. For Gannett and News Corp, he estimates combined print and digital ad revenues will decline 12.5% and 7%, respectively. The companies declined to comment.

In response to the print decline, the Journal may further reduce head count, according to people familiar with the matter.

It isn’t alone. The New York Times said further downsizing is expected in the newsroom early next year. Emphasizing the importance of digital, the Times this week named A.G. Sulzberger—who has focused on the newsroom’s digital transformation—as deputy publisher, putting him in line to become the next publisher.

In the U.K., Daily Mail & General Trust, the owner of the Daily Mail, said it was cutting more than 400 jobs last month in response to a tough ad market. Guardian Media Group, which publishes the Guardian and the Observer, slashed about 250 positions earlier this year.

“Newspapers are a tough place to be right now,” said Stephen Daintith, chief financial officer of Daily Mail & General Trust. “The decline in the U.K. has been even more severe over the last 12 months.”